The Lifeblood of an Entire Region

The catchment of the Zayandeh Rud (Farsi for ‘life-giving river‘), is one of the most diverse regions in Iran: From the snow-covered Zagros Mountains, through wide floodplains and desert regions to the Gavkhuni Salt Lake, the catchment is a special habitat. For centuries the river has attracted people and the entire region is host to a uniquely diverse ecology.
During the last 60 years, the population in the catchment has grown from less a million to almost four million. Today, more than 1 million people live from the land producing wheat, barley and other staple food. Important steel, oil and cement industries have settled along the river which along with numerous smaller enterprises employ more than 300,000 people.

Chances and problems of regional growth
The steady growth of the region, coupled with the onset of climate change, have taken their respective tolls, leading to increasing water management challenges. While water demand rises, the Zayandeh Rud’s water resources decrease and with them the livelihood of people and important ecosystems dwindle. Temperatures have been rising constantly, while annual rainfall has been declining.
Up until a few years ago the river dominated the cityscape of Isfahan, one of the major cities in Iran with UNESCO World Heritage Sites. Its historical bridges and little canals were famous tourist attractions and places of recreation for young and old alike. Numerous species of birds migrate there for the winter in the region around the Gavkhuni Salt Lake and even ventured into the city centre. For flamingos the salt lake was an ideal habitat. Because of its importance for migratory birds the salt lake was acknowledged as a UN Ramsar Convention site. 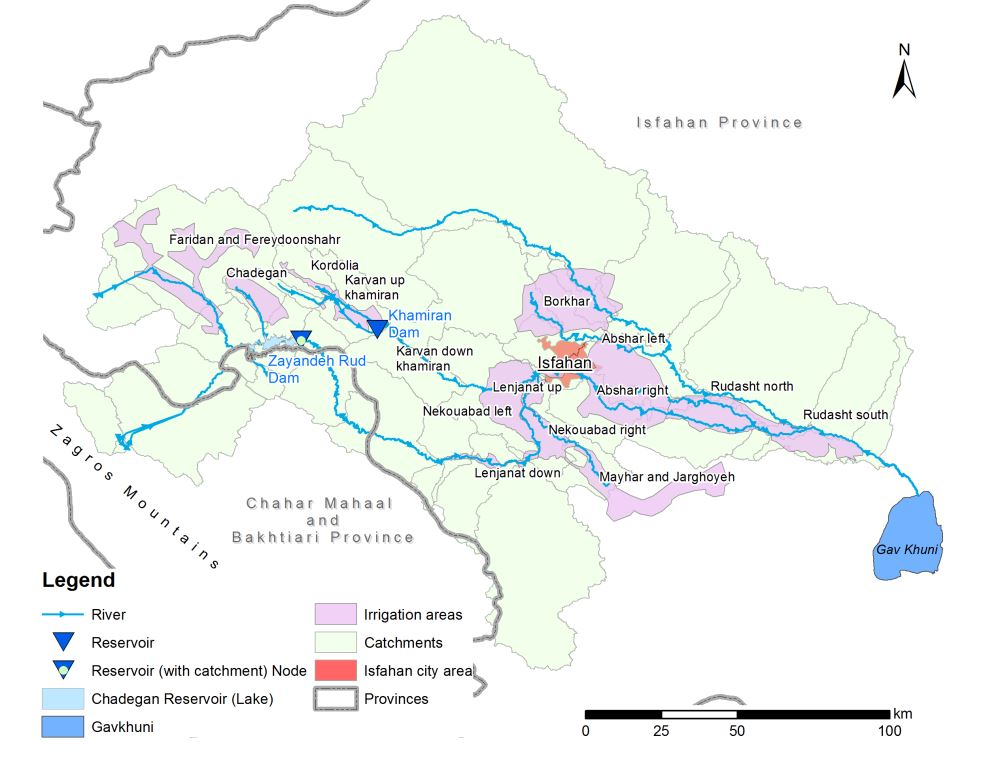 The gap between water demand and water availability
As the gap between water availability and water demand grows the different water users increasingly compete for the scarce resource. Farmers, subject to uncertainty, ask themselves: “When will the next drought come? Will I have enough water for my fields? Will I be able to feed my family?” Industrial and drinking water supply is also under threat. Up until today, industrial enterprises in the catchment are still depending on fresh water resources for various purposes, and their demand is rising with steady industrial growth. Last not least, the Zayandeh Rud is the main supplier for drinking water in the region.
The diminishing of ‘the life-giving river’ is a tragedy for the entire region and not only for economic reasons but also from social, health and ecological perspectives. This situation that evolved over centuries, however, will not be solved overnight. But it is worthwhile to be tenacious in alluring all stakeholders for sustainable water management. There are many good examples for successful cooperation of different stakeholders even across borders, like the International Commission for the Protection of the Rhine. A concept for a sustainable and integrated management of Zayandeh Rud is a crucial component for this. The natural beauty of the region, its biodiversity and, not least, the more than 4.3 million people can profit from its effective measures.